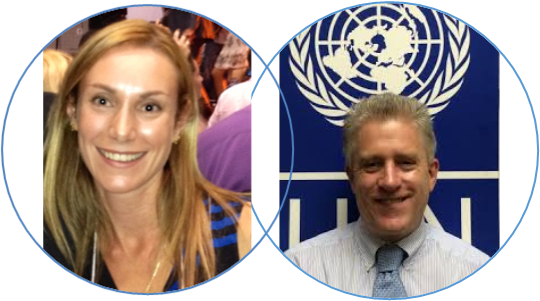 Gail Hurley
Policy Specialist, Development Finance, UNDP, New York
Gail Hurley is a Policy Specialist on Development Finance at the United Nations Development Programme (UNDP) in New York. She has held this role since January 2010. Gail advises UNDP on development finance issues and has written numerous research papers, articles and regularly blogs on the subject. Her areas of expertise and interest include: sovereign debt (with a particular focus on small island developing states), aid policies and aid delivery, innovative sources of development finance, international public finance, domestic resource mobilization (including tax policies) and private financial flows.  At the country level, she has supported governments in the Caribbean and Africa to devise strategies for the expansion and diversification of domestic and external revenue bases, including through innovative financing approaches. Most recently, she has been exploring strategies to catalyse public and private investment in the ‘blue economy’. Gail led UNDP’s preparations for the July 2015 UN conference on financing for development in Addis Ababa, Ethiopia. She is the Project Manager for the joint UNDP-OECD ‘Tax Inspectors Without Borders’ initiative (a programme that aims to build developing countries’ capacities in tax audits). Prior to joining UNDP, Gail was a Policy and Advocacy Officer with EURODAD (European Network on Debt and Development), a research and advocacy NGO on development finance issues in Brussels, Belgium (from 2004-2010). In 2007 and 2008, Gail was seconded to serve as an advisor to the Government of Ecuador at the Ministry of Economy and Finance. In 2006, she was seconded to Bolivia and Peru to advise the Latin American Network on Debt, Development and Rights (LATINDADD) for two months. Gail was Director of the European Volunteer Centre (CEV), a Brussels-based European NGO between 2002 and 2004. The NGO aims to expand voluntary service schemes both within and outside the European Union, in particular for youth. She has also worked at the European Commission in the Directorate General for Development on the Overseas Countries and Territories – OCTs where she was responsible for communications and briefings. She holds an MSc. in Development Studies from the School of Oriental and African Studies (SOAS) and a Postgraduate Diploma in Economics from the University of London. Her undergraduate studies were in French and Spanish at the University of Liverpool, UK. Gail is a member of the Board of Directors of the Center for Economic and Policy Research (CEPR), an economic policy think-tank based in Washington DC, and also serves on the Advisory Board of the ‘Righting Finance’ initiative (an initiative that aims to develop a human rights approach to international and national financial regulation).


Andrew Hudson
Head, Water and Ocean Governance Programme, UNDP NY
Andrew Hudson joined UNDP in 1996 as Principal Technical Adviser for the UNDP-GEF International Waters Programme. He is currently Head of the UNDP Water & Ocean Governance Programme (www.undp.org/water) in the Sustainable Development Cluster of UNDP’s Bureau for Policy and Programme support (BPPS).  He oversees and provides strategic, policy and technical guidance on all aspects of the development, implementation and evaluation of UNDP’s work in water and ocean governance with a currently active portfolio of about US$200 million working in over 100 countries.  He also served as Principal Technical Adviser for the UNDP/GEF Persistent Organic Pollutants (POPs) programme, from 2001 to 2005. He coordinated the strategic development and start-up of UNDP’s POPs portfolio and integration of the programme into UNDP’s Chemicals Management/Montreal Protocol Unit.  He also serves as the “Green Team Leader” at UNDP leading efforts to move the organization towards environmental sustainability in its operations, including minimizing the organization’s carbon footprint. Prior to joining UNDP, Mr. Hudson was Executive Director of The Center for Field Research at Earthwatch where he directed the development of Earthwatch’s annual field research program of 150 projects and over $3 million in grants.  He has also taught at the university and secondary school levels and was active in oceanographic research in the 1970’s and 1980’s in areas such as hydrothermal vent geochemistry, sedimentary diagenesis, hydrography and air-sea exchange. Mr. Hudson received his BS and MS in Earth and Planetary Sciences from MIT, was a doctoral student in Oceanography at the University of Rhode Island, and received his PhD in Environmental Sciences from the University of Massachusetts-Boston, specializing in Environmental Economics and Policy.