UN DOCO From Funding to Financing: Session 2 - How to calculate the full funding flows in my country (public, private, international, national) 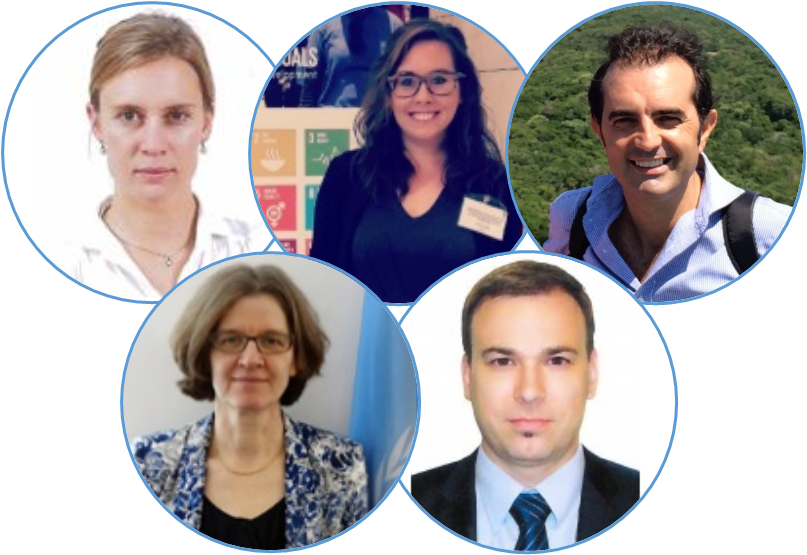 Ashley Palmer
Governance and Development Effectiveness Specialist, UNDP Bangkok Regional Hub
Ashley Palmer has been working as Governance and Development Effectiveness Specialist with UNDP Bangkok Regional Hub since 2014. Prior to that, from 2007-2014 she was with the regional Capacity Development Team in UNDP BRH. Prior to joining UNDP, Ashley worked with the American Society of International Law in Washington, DC.


Emily Davis
Development Policy Specialist, UNDP Bangkok Regional Hub
Emily Davis is a Policy Specialist at the UNDP Bangkok Regional Hub focusing on development finance and effectiveness within the Governance and Peacebuilding Unit. Previously she worked at UNDP China as a Partnership Specialist working on South-South Cooperation with a focus on China-Africa research. Emily has worked previously on microfinance and health projects in Kenya, China and Costa Rica.


Luca Monge Roffarello
Senior Economic Advisor for Guinea Bissau and Cape Verde, UNDP
Luca Monge Roffarello, of Italian nationality, holds a University degree in economics at the University of Turin, in Italy and a Master Degree in Development Economics at the University of East Anglia, UK. He joined the UN with UNCTAD as trade economist in 1999 and since then he has worked in the UN system with increasing responsibilities. Since 2009, he is a UNDP senior economic advisor serving in different African countries.  His main area of work is economic planning, public finance management, international trade and trade negotiations, sustainable human development and aid effectiveness with a special focus and interest on LDCs, SIDS and LLDCs issues. He has published extensively, especially on trade-related issues such as trade negotiations, preferential market access, aid for trade and effectiveness, and collaborates regularly in the preparation of African Economic Outlook Report. He lived and worked in UK, Switzerland, Guinea-Bissau, Mozambique and Cabo Verde.


Henriette Keijzers
Deputy Executive Coordinator, Multi-Partner Trust Fund Office
Henriette Keijzers is the Deputy Executive Coordinator of the Multi-Partner Trust Fund Office (MPTF Office) and the co-chair of the UNDG Joint Funding Task Team. The MPTF Office is a UN center of expertise on pooled financing mechanisms that provides fund design and fund administration services to the UN system and national governments.  Before joining the MPTF Office in 2009, Ms. Keijzers was the Deputy Executive Secretary / Executive Secretary ad interim at UNCDF, a UN fund that focuses on investing in the LDCs in the areas of local development and inclusive finance.  Ms. Keijzers started her career with the UN in 1989 and worked in different UNDP field offices in Africa (Ghana, Malawi, Nigeria, Guinea-Bissau and Burkina Faso). Ms. Keijzers holds a Masters degree in International and Development Economics from Tilburg University in The Netherlands.


Jakob Schemel
Head of Office, Office of the UN Resident Coordinator in Lao PDR
Jakob Schemel heads the United Nations Resident Coordinator’s Office in Lao PDR. Previously, Jakob served as Policy Specialist at the Development Operations Coordination Office in New York, and advised UN Country Teams in Armenia, Moldova and Albania. His earlier experience includes working at the Ministry of Foreign Affairs in Austria and - more hand-on - in a children’s home in Guatemala.