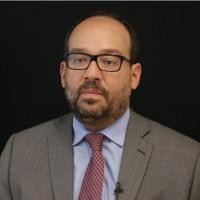 Vinicius Pinheiro is the Deputy Director of the International Labour Organization (ILO) Office for the UN (New York) and Executive Secretary of the Social Protection Interagency Coordination Board since October 2012. He is representing the ILO in the UN discussions related to the post-2015 development agenda, social protection, youth employment and migration.

Before, Mr Pinheiro served as senior social protection adviser to the ILO Director General in Geneva. From 2009-2013, he was part of the ILO Sherpa G20 Team and acted as Executive Secretary of the Social Protection Floor Advisory Group. He was also the focal point for the preparation of the UN Conference on Sustainable Development (Rio +20) and its follow up.
Between 2002-2005, he worked in the Organization for Economic Cooperation and Development (OECD), in Paris and provided consultancy services for the Inter-American Development Bank (IDB) and to the World Bank for projects in Africa and Latin America. From 1999-2002, he was the National Secretary for Social Security of Brazil. In 2001, he was elected Vice-President of the Inter-American Social Security Conference (CISS), based in Mexico City.

Mr Pinheiro holds a Master’s degree in Political Science from the University of Brasília and specializations in Public Administration and Public Policies (National School of Public Administration, Brasília); Evaluation of Social Programmes and Projects (ILPES-ECLAC, Santiago de Chile); Pensions Schemes (Harvard International Institute for Development, Cambridge) and Leadership in the Public Sector (Harvard Kennedy School of Government, Cambridge). He taught at the University of Brasília (1994 – 1996) and authored various articles in the area of pensions and social protection.